Jan asks you for a loan. He wants $100 now and offers to pay you back $120 in 1 year. You can borrow and lend from the bank at an interest rate of 10% pa, given as an effective annual rate.

A 10 year Australian government bond was just issued at par with a yield of 3.9% pa. The fixed coupon payments are semi-annual. The bond has a face value of $1,000.

Six months later, just after the first coupon is paid, the yield of the bond decreases to 3.65% pa. What is the bond's new price?

When using the dividend discount model, care must be taken to avoid using a nominal dividend growth rate that exceeds the country's nominal GDP growth rate. Otherwise the firm is forecast to take over the country since it grows faster than the average business forever.

In approximately how many years will the company's total dividends be as large as the country's GDP?

Which of the following investable assets are NOT suitable for valuation using PE multiples techniques?

The investment decision primarily affects which part of a business?

The financing decision primarily affects which part of a business?

Who is most in danger of being personally bankrupt? Assume that all of their businesses' assets are highly liquid and can therefore be sold immediately.

Adam and Bella are the only people on a remote island. Their production possibility curves are shown in the graph. 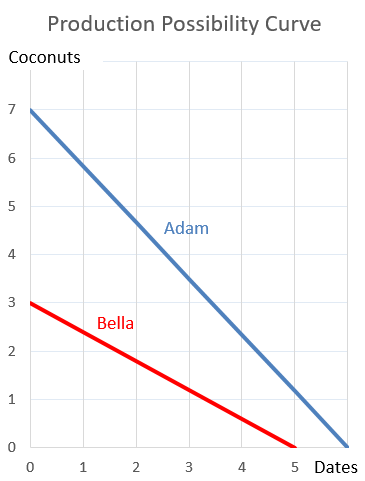 A stock's returns are normally distributed with a mean of 8% pa and a standard deviation of 15 percentage points pa. What is the 99% confidence interval of returns over the next year? Note that the Z-statistic corresponding to a one-tail:

The 99% confidence interval of annual returns is between:

When does the ‘principal-agent problem’ occur? Is it when:

I. The principal has conflicting incentives (moral hazard);

III. The principal has incomplete information about the agent (asymmetric information); or

IV. The agent has incomplete information about the principal (asymmetric information)?

The principal-agent problem occurs when statements: