A project has an internal rate of return (IRR) which is greater than its required return. Select the most correct statement.

In the Merton model of corporate debt, buying a levered company's debt is equivalent to buying risk free government bonds and:

A risky firm will last for one period only (t=0 to 1), then it will be liquidated. So it's assets will be sold and the debt holders and equity holders will be paid out in that order. The firm has the following quantities:

##F_1## = Total face value of zero coupon bonds which is promised to be paid in one year. 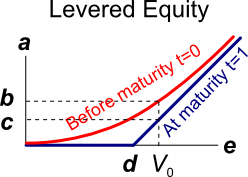 The levered equity graph above contains bold labels a to e. Which of the following statements about those labels is NOT correct?

What is the net present value (NPV) of the project?

If housing rents are constrained from growing more than the maximum target inflation rate, and houses can be priced as a perpetuity of growing net rental cash flows, then what is the implication for house prices, all things remaining equal? Select the most correct answer.

Background: Since 1990, many central banks across the world have become 'inflation targeters'. They have adopted a policy of trying to keep inflation in a predictable narrow range, with the hope of encouraging long-term lending to fund more investment and maintain higher GDP growth.

Australia's central bank, the Reserve Bank of Australia (RBA), has specifically stated their inflation target range is between 2 and 3% pa.

Some Australian residential property market commentators suggest that because rental costs comprise a large part of the Australian consumer price index (CPI), rent costs across the nation cannot significantly exceed the maximum inflation target range of 3% pa without the prices of other goods growing by less than the target range for long periods, which is unlikely.

If the Kogan phone lasts for one year, approximately how long must the Apple phone last for to have the same equivalent annual cost?

Assume that both phones have equivalent features besides their lifetimes, that both are worthless once they've outlasted their life, the discount rate is 10% pa given as an effective annual rate, and there are no extra costs or benefits from either phone.

In February a company sold one December 40,000 pound (about 18 metric tons) lean hog futures contract. It closed out its position in May.

What was the total profit?

Which of the following statements is NOT correct? Lenders:

This question is about the Balance of Payments. Australia's current account as a percent of nominal gross domestic product (GDP) per annum is shown in the graph below.

Assume that all foreign and domestic assets are either debt which makes interest income or equity which makes dividend income, and vice versa for liabilities which cost interest and dividend payments, respectively.