What is the NPV of the following series of cash flows when the discount rate is 10% given as an effective annual rate?

What is the company's after-tax Weighted Average Cost of Capital (WACC)? Assume a classical tax system.

Just after the dividend was paid, the share price fell to $27 (at t=1). What were the total, capital and income returns given as effective annual rates?

The choices are given in the same order: 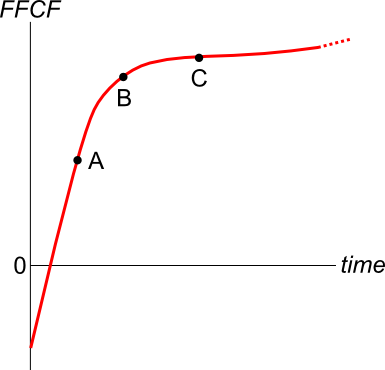 Which firms tend to have high forward-looking price-earnings (PE) ratios?

The efficient markets hypothesis (EMH) and no-arbitrage pricing theory are most closely related to which of the following concepts?

A company conducts a 2 for 3 rights issue at a subscription price of $8 when the pre-announcement stock price was $9. Assume that all investors use their rights to buy those extra shares.

What is the percentage increase in the stock price and the number of shares outstanding? The answers are given in the same order.


Question 761  NPV, annuity due, no explanation

The phone company Optus have 2 mobile service plans on offer which both have the same amount of phone call, text message and internet data credit. Both plans have a contract length of 24 months and the monthly cost is payable in advance. The only difference between the two plans is that one is a:

Neither plan has any additional payments at the start or end. Assume that the discount rate is 1% per month given as an effective monthly rate.

The only difference between the plans is the phone, so what is the implied cost of the phone as a present value? Given that the latest smart phone actually costs $600 to purchase outright from another retailer, should you commit to the BYO plan or the bundled plan?

"Buy low, sell high" is a well-known saying. It suggests that investors should buy low then sell high, in that order.

How would you re-phrase that saying to describe short selling?