In Australia, domestic university students are allowed to buy concession tickets for the bus, train and ferry which sell at a discount of 50% to full-price tickets.

The Australian Government do not allow international university students to buy concession tickets, they have to pay the full price.

Some international students see this as unfair and they are willing to pay for fake university identification cards which have the concession sticker.

What is the most that an international student would be willing to pay for a fake identification card?

Approach this question from a purely financial view point, ignoring the illegality, embarrassment and the morality of committing fraud.

A 30 year Japanese government bond was just issued at par with a yield of 1.7% pa. The fixed coupon payments are semi-annual. The bond has a face value of $100.

Six months later, just after the first coupon is paid, the yield of the bond increases to 2% pa. What is the bond's new price?

The market expects the Reserve Bank of Australia (RBA) to increase the policy rate by 25 basis points at their next meeting.

Then unexpectedly, the RBA announce that they will increase the policy rate by 50 basis points due to high future GDP and inflation forecasts.

What do you expect to happen to Australia's exchange rate in the short term? The Australian dollar will:

Which of the following FX quotes (current in October 2015) is given in American terms?

The below table summarises the borrowing costs confronting two companies A and B.

The famous investor Warren Buffet is one of few portfolio managers who appears to have consistently beaten the market. His company Berkshire Hathaway (BRK) appears to have outperformed the US S&P500 market index, shown in the graph below. 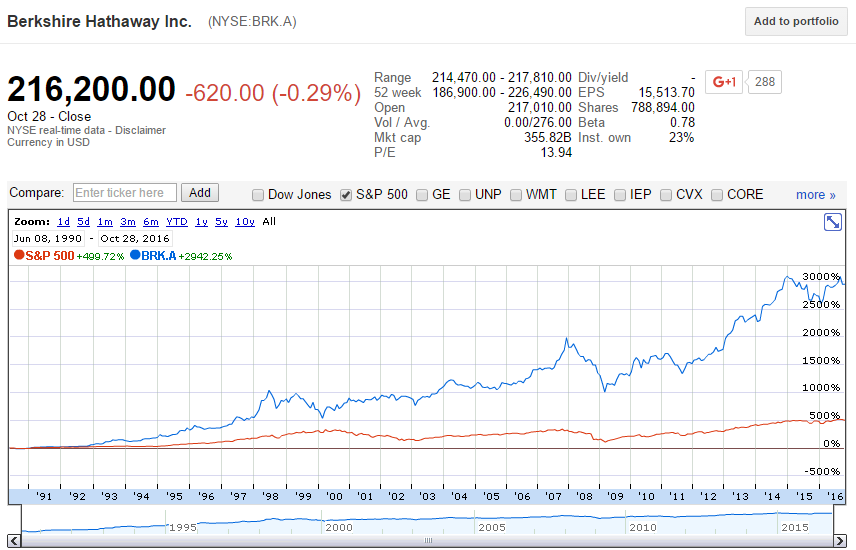 Read the below statements about Warren Buffet and the implications for the Efficient Markets Hypothesis (EMH) theory of Eugene Fama. Assume that the first sentence is true. Analyse the second sentence and select the answer option which is NOT correct. In other words, find the false statement in the second sentence.

A European call option should only be exercised if:

The below table shows Australian monetary aggregates. Note that ‘M3’ is the sum of all the figures in the table and ‘ADI’ stands for Authorised Deposit-taking Institution such as a bank, building society or credit union.

Observe the below graph of Chinese foreign exchange reserves held by the central bank, as well as the Chinese currency the Yuan (CNY, also called the Renminbi, RMB) against the US Dollar. Note the inverted y-axis scale on the Yuan exchange rate graph.

Which of the below statements is NOT correct?